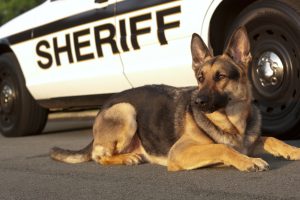 One of the most popular dog breeds in the United States is the German shepherd dog (GSD). Not only is this breed a great family dog, but a working one too for search and rescue, the military or as guide dogs for the blind.

German shepherd dogs are one of the few breeds that uses “dog” in its name. This was to avoid confusing the “German shepherds” that tended to flocks of sheep with a dog breed by the same name during the 1800s. In 1914, GSDs had gained popularity in the United States, so much so that rumors spread of dropping “German” from the name altogether and changing it to “shepherd dog.” The American Kennel Club removed “German” from the breed’s name in 1917, but voted to change it back in 1930.

In the early 1900s, GSDs were trained to work in the German military. They carried ammunition, guarded people or positions, acted as messengers and conducted search and rescues. GSDs impressed American soldiers and they brought some of the dogs back home with them, causing their popularity to rise. One GSD, Filax of Lewanno, was honored at the 1917 Westminster dog show for rescuing 54 soldiers during the course of a year in the Allied trenches.

Dorothy Harrison Eustis started training GSDs as guide dogs for the blind in 1927. The first recipients were WWI veterans blinded in battle. Eustis’s work found Morris Frank; he was blinded as a child and was an advocate for the need of seeing-eye dogs. The two went on to co-found The Seeing Eye, the first guide dog school in the United States. Due to Frank’s continued campaigning, by 1956 all states had passed laws permitting guide dogs to accompany their owners in public areas.

Whether as a guide dog or a household pet, German shepherd dogs make the perfect match. As their popularity only continues to rise, you’ll be sure to notice more of these graceful pups in public spaces around you.