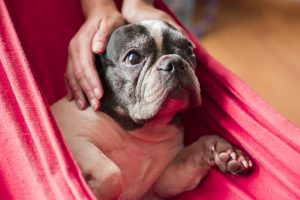 As a dog owner, you’re most likely aware that dogs can contract serious illnesses, such as kennel cough and giardia. But, can pets still have common colds and feel under the weather, too?

The answer is yes. Just like the common cold that plagues us all, a dog cold can be similarly transmitted and prevented. Be careful when you’re sick, as there is a slight chance you can pass your human cold to your dog. When the roles are switched, it’s much more likely that your dog’s cold was contracted by a playmate at doggy daycare or the dog park, and is a strain specific to dogs, though there may be similar symptoms.

Colds are airborne viruses that live and breed in our mouths and noses. Chewing on toys, sharing water bowls and fighting other pups with a drooling mouth may be exposing your dog to germs that could leave them sniffling or coughing the next day.

Dogs have no natural immunity to the virus, so it’s important to limit their exposure to it and keep an eye out for the following cold symptoms:

The Canine Flu: H3N8 virus is most like a cold and is spread the same way. Dogs with Canine Flu might also experience additional symptoms such as no appetite.

Kennel Cough: This highly contagious respiratory infection is recognizable by a dry cough. This cough will sound much different than a wetter cough you’d hear from a dog with a cold or flu. Some compare the sound to honking. See a veterinarian ASAP.

Distemper: Most dogs are vaccinated against Canine Distemper as puppies, but it’s still important to know the signs, as this viral illness can be life threatening.

This virus upsets a dog’s lymph nodes and tonsils first, with symptoms similar to a cold, such as exhaustion and runny eyes/nose. Other symptoms may include vomiting and diarrhea. If untreated, the virus can attack the nervous system, leading to seizures and paralysis. Seek medical attention ASAP.